Number of units: 30 Type of Co-op or Scheme:
Client Co-op 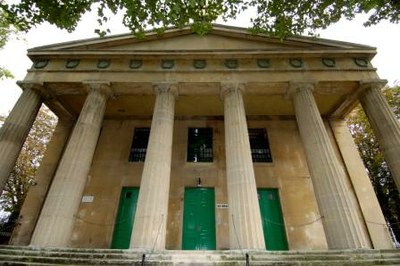 St George’s Church Housing Co-operative contains one bedroom flats situated at the edge of Burgess Park in the Camberwell SE5 area of London.

St George’s Church was originally built in 1824 by a local architect Francis Octavius Bedford and was one of the ‘million pound’ churches paid for by a vote of Parliament being part of the thanks for a grateful nation for deliverance from Napoleon. By 1976 it had become deconsecrated and derelict and in the early 1980’s a serious fire destroyed the interior leaving only the external walls and the tower standing. CDS Co-operatives redeveloped the church between October 1992 and May 1994 with tenancies commencing in June 1994.

The co-op is an independent fully mutual co-operative and is managed by a committee of members.

The homes are built on three floors within the existing walls around a central courtyard.  The development is secure with an entry phone system.

There are pleasant and mature communal gardens which surround the church and off street parking in the church grounds with a card entry only barrier gate.

Extensive shopping facilities are a 15 minute walk away in Walworth Road.

St George’s Co-op  has a 50% nominations agreement with the London Borough of Southwark. The Co-op allocates the remaining 50% of vacancies to those in housing need on its own waiting list.